Posted on 21/03/2019 Categories: Events, International Trainings, News and experiences! No comments yet

Six in the morning and the aircraft touches down after five hours – it was a long but comfortable flight.  Later on, our team coming from Barcelona, formed by two Germans and two Spanish, arrived in Rustavi, a city near to Tbilisi, the capital of Georgia. We leave our luggage and go to sleep. The adventure has just started. Eight days later, I left Rustavi and I still couldn’t realize how much has happened. training course

It was my first non-formal education project, and because of that I had these “let’s see”- expectations, combined with a good dose of curiosity. The training course on Peacebuilding and Conflict Transformation that took place in Rustavi was a wonderful and rich experience, and my first contact with Georgia and the Caucasus in general, an engrossing region that attracted my attention. 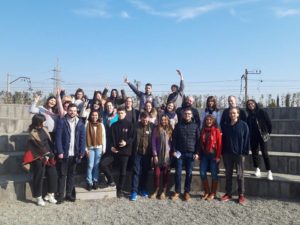 People from all around the world joined the project. Participants came from eight countries and had at least fourteen different nationalities. Such a melting pot, isn’t it? Fortunately, variety is the spice of life, but it also raised the question: What do we have in common, coming from Georgia, Armenia, Azerbaijan, Macedonia, Syria, Germany, Indonesia, Turkey, Switzerland, Rusia, India, Spain, The Netherlands and Ukraine?

It quickly became clear that all the participants taking part in the experience have different thoughts, opinions and backgrounds. It also became clear that all the participants are tackling problems in different realities.  Understanding different contexts is necessary to understand how people think and act in other parts of the world. We need to listen more to each other’s stories and if we can, go overseas, where we will find out new perspectives in youth activism and participation – from local to international.

Regarding the question above, I can say that – as far as I am concerned – we do have things in common. A lot, actually. All of us are bound by a common thread: the youthfulness. It means that we are trying to understand the role of youth and, above all, are facing problems and conflicts in our communities. 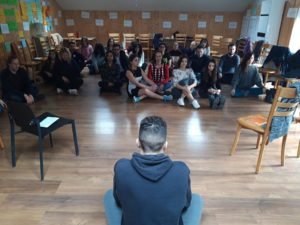 I did not know what we exactly mean by terms like youth, conflict, peace, power and violence. In that sense, next to having an enriching experience with other young peacebuilders, we also learned – or at least we had a little taste of learning – the meaning of all these complex and powerful concepts which we explored through non-formal education methods.

Let me describe an activity related to power, to give an example. This simple, yet tricky, word has a lot of meaning and there are different definitions and understandings. However, what will occur if you try to explain this word through the tools of non-formal education? We did a really practical activity in which participants had to explain the concept of power, by creating figures using only three chairs. Yes, it sounds odd, doesn’t it? Through the activity various understandings of power came up. Some people understood the concept as a hierarchy, others as a notion of sharing, and others as an oppression. And, according to that, the chairs were organised differently.

Back in time, when I was doing my studies in International Relations, I took a course on conflict resolution. I studied theories, but I never applied them in an activity – after this I realized the importance of non-formal education. During the training, I contemplated how through a constant interaction between trainers and participants the understanding of ideas changes dramatically.

I know that I know nothing, like Platon said. Because the more I see, the less I know, and the real knowledge is in the material reality – we must be change makers.

Written by Martin Madridejos, from UNOY member Fundació Catalunya Voluntària, who has been part of the ‘Strengthening Capacities for Youth-Led Peace Initiatives’ training in Georgia. 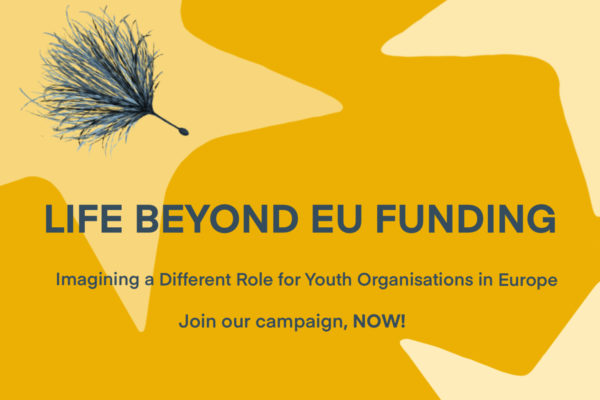 Is there life beyond the EU funds?

Have you heard about 360º Education Alliance?

This website uses cookies to improve your experience while you navigate through the website. Out of these cookies, the cookies that are categorized as necessary are stored on your browser as they are essential for the working of basic functionalities of the website. We also use third-party cookies that help us analyze and understand how you use this website. These cookies will be stored in your browser only with your consent. You also have the option to opt-out of these cookies. But opting out of some of these cookies may have an effect on your browsing experience.
Necessary Always Enabled
Necessary cookies are absolutely essential for the website to function properly. These cookies ensure basic functionalities and security features of the website, anonymously.
Functional
Functional cookies help to perform certain functionalities like sharing the content of the website on social media platforms, collect feedbacks, and other third-party features.
Performance
Performance cookies are used to understand and analyze the key performance indexes of the website which helps in delivering a better user experience for the visitors.
Analytical
Analytical cookies are used to understand how visitors interact with the website. These cookies help provide information on metrics the number of visitors, bounce rate, traffic source, etc.
Advertisement
Advertisement cookies are used to provide visitors with relevant ads and marketing campaigns. These cookies track visitors across websites and collect information to provide customized ads.
Others
Other uncategorized cookies are those that are being analyzed and have not been classified into a category as yet.
SAVE & ACCEPT
Powered by